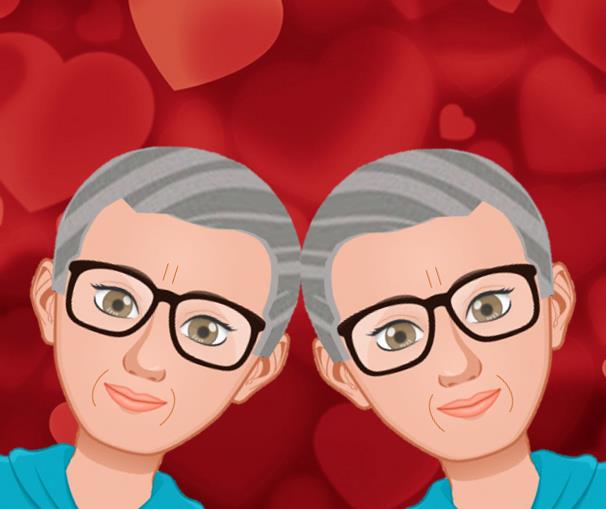 Happy Valentine’s Day to me! Eww. Pathetic. Who would ever want their best Valentine to be their self? Well, I suggest, we all should. For our health, wellbeing and happiness.

My research for this post led me to an article by Brian Resnick, Senior Science Reporter for Vox. It’s on identical twins. When 15 or so twin pairs at an international Twins festival were asked what’s the best part about being a twin, the overwhelming response, Resnick noted, was that it’s like having a built-in best friend for life. One father of six-year-old twins said about his boys: “It’s like having a sleepover with your best buddy every night”. Resnick admitted jealously of the obvious love for each other the many twins at the festival had.

The bond between identical twins is extremely strong; one study referenced by Resnick indicates that being a twin can actually provide a survival advantage. Not surprising, when a substantial amount of scientific research gives evidence that there is a positive correlation between strength of social relationships and lifetime health and mental well-being. Apparently, in the absence of healthy interpersonal relationships, loneliness has the same detrimental effect on longevity as cigarette smoking.

Most of us are not advantaged with having an identical twin, a “built-in best friend for life”. But maybe we could be, and we just don’t realize it.

I doubt very much that loving identical twins would hurt and undermine each other through unforgiveness for mistakes, by holding the other to ridiculously high standards, or constantly reminding the other of their inadequacies, wielding shame and blame at the other.

So why, in the name of all that’s good and beautiful, do we hurt and undermine our inside person who could otherwise be our unconditionally loving, built-in best friend for life? What might happen if we begin thinking of our self as our best buddy that we don’t ever want to lose? What if we begin practicing and developing self-forgiveness, self-compassion, self-respect and all the other aspects of self-love?

This is what I think might happen. We’ll support the best version of ourself to live our fullest life. We’ll demonstrate that we’re loveable and thereby invite in love from others. With a robust self-relationship, we’ll be enabled to develop healthy, happy, life-enhancing interpersonal relationships. We’ll never, ever be lonely. We’ll wake up each and every morning to see our best sleep-over, built-in buddy and be excited for all the fun we’ll have together today.