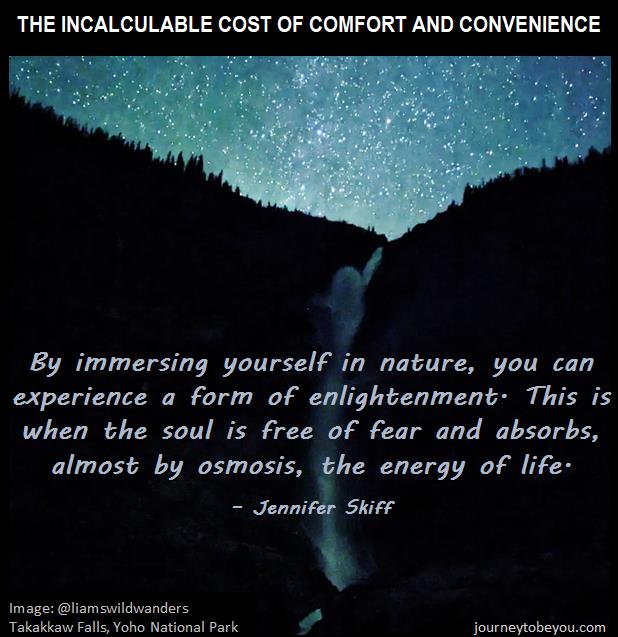 The Cree word “takakkaw” translates as “magnificent” in English. “Magnificent” is one word that describes my night sleeping near the base of the Takakkaw Falls in Yoho National Park, British Columbia. Others are: “restorative”, “immersive”, “elemental”.

On my autumn road trip through Alaska and the Canadian Rockies, this wasn’t my only numinous experience of feeling one with nature. Time and again, lying amongst the trees, beneath a non-light-polluted, star-strewn sky, near fast-flowing or falling glacial melt waters in a vast wilderness, I’ve been poignantly and viscerally reminded that I belong; that I’m an intrinsic part of a magnificent, much greater, all-encompassing creation.

In stark contrast to this embracing immersion in nature, a few nights after Takakkaw Falls —due to extenuating circumstances—I found myself attempting to fall asleep in a king-sized, white-linened bed, much larger than my one-person camping tent, in a climate-controlled hotel room in the Canadian city of Edmonton. With the curtains drawn to black out the urban night light and my eyes shut tight, I tried to recreate nature’s darkness in the wilds; I tried to imagine the white noise of the air conditioner to be the soothing sound of water cascading down a mountain side. In my soft bed surrounded by softer pillows, I tried to conjure the feeling of being grounded by the earth beneath my one-inch-thick, 18-inch-wide, sleeping mat. Breathing in the recycled hotel room air, I tried to recall my cleansing breaths of tree-freshened, crisp night air that drugged me into a deep sleep. Behind the double-locked door, I yearned for the freedom of the wilderness.

Surrounded by the creature comforts and conveniences of my hotel room, sleep eluded me.

Instead of my mind contracting into slumber, it expanded into wakefulness, first considering the hotel amenities: my bed that could theoretically sleep four; the large TV; the microwave, fridge and coffee maker; the climate controls; the Jacuzzi tub; enough white bathroom towels to serve the four people who could technically fit in my bed; the complimentary breakfast served using disposable plates, cups and cutlery; the sanitizing of the linens and towels after my departure; the swimming pool and hot tub. Reeling over the cost of my hotel room, my mind could not find rest. But it wasn’t the cost to my bank account that wreaked havoc with my peace of mind; it was the much larger cost.

And further out my restless mind expanded, considering the millions of similar hotel rooms around the world catering to millions of travellers seeking comfort and convenience every night of every year. Travellers who have journeyed so, so far away from the natural world; alienated from the water, trees and stars.

It kept going, my mind, expanding even beyond the hotels into the houses of billions of humans across the globe—houses providing similar creature comfort amenities to a greater or lesser extent.

And the cost of hotels, never mind houses? In 2020, it cost travellers around the world $198.6 billion US to stay in hotels (hoteltechreport.com). That’s an industry-useful cost that can be computed, but ultimately it’s not the most important or relevant cost, which is the incalculable cost of comfort and convenience to humanity.

Nature-deficit disorder pertains to the cost of human psychological and spiritual alienation from nature. Rampant addiction, anxiety, depression and anger are increasingly interpreted as manifestations of our disconnect from the natural world. On a societal level, this separation is seen as a root cause of our extremely costly and deepening ecological crisis. Paraphrasing Ernst Schumacher: We humans do not experience ourselves as a part of nature but as an outside force destined to dominate and conquer it, forgetting that if we win the battle, we’ll find ourselves on the losing side.

In my hotel room that night in Edmonton my wide-awake mind troubled over humanity’s “ability” to dominate and conquer nature. And there I lay, feeling every bit on the losing side.

My sharing this experience is not to disparage the hotel industry which provides a crucial service to travellers disinclined or unable for a myriad of reasons to tent in the wilderness. It’s a front-desk, wake-up call for awareness of the personal and environmental price we’re paying for our very costly creature comforts and conveniences.