One of the most harmful admonishments has to be: “Act your age!”  Who, exactly, gets to say how anyone is supposed to act at any given age? Where is that list of certified age-appropriate actions? I get the importance of responsibly acting in accordance with the role you’re in. For example, as a 65-year-old grandmother of a two-year-old, I’m her safekeeper when I’m alone with her, and it’s my duty to act as her safekeeper without fail. But, while doing so, if I want to go down the slide in the playground after her, or I want to get filthy with her making castles of dirt, or I want to sing at the top of my lungs “I scream, you scream, we all scream for ice-cream” in response to her request, I’m going to do so, age be damned.

Also, if I want to begin my Master’s Degree program at the age of 64 and celebrate my academic accomplishment with a backcountry, wilderness canoeing adventure in Algonquin Park, I’m going to do so, and I did do so. Academia was so much more enjoyable this time round, without the pressure of societal expectations, without it being a prerequisite to a career, without the distracting hormonal influences. I felt entirely comfortable in the company of professors younger than me, and fellow students significantly younger than my own children. It was unadulterated fun and fulfillment. My subsequent canoe trip at my son’s invitation—as I write about in my blog A happy kind of sadness—was likewise awesome in the real sense of that word. Here again I was in a realm typically characterized by people with much less mileage on their odometer.  I didn’t pretend or expect to have the speed and stamina of my younger self, but neither was I going to deny myself the wilderness adventure because of that.

I’m not in denial of my age and the increasing limitations that come with its merciless advancement, but adopting as my mantra George Eliot’s adage: “It’s never too late to be what you might have been” spurs me on to act however it is that enables me to edge closer to what I might have been if I’d pulled out all the stops. Do I know what that is? No, I don’t. Not yet. Not exactly. But if a serious urge strikes me, I take it to be a message from the universe that it has something to do with what I might be. Again, I say, age be damned, which is what I said when, in my late 50s, I took a training program to earn my professional life coach designation. I said it when I decided to take early retirement from the corporate world a couple of years later so I could do something new aligned with my training and passion; and I said it when I pushed the boundaries of my comfort zone to create videos that are part of my Become Unfcukwithable webinar. Because it all has something to do with what I might be.

My age-incongruent activities are decidedly insignificant to the masses, but then there are the inspirational likes of:

Martha Stewart, who didn’t get into home decorating until she was 35;

Susan Boyle, achiever of the U.K.’s best-selling album of all time, who was 47 when she was “discovered” on Britain’s Got Talent; 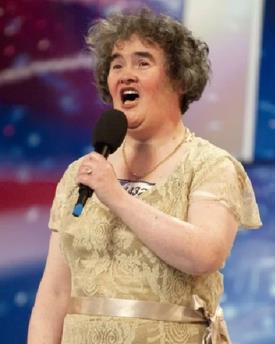 Harland (Colonel) Sanders, who franchised his secret recipe for Kentucky Fried Chicken (KFC) at the age of 62;

Grandma Moses, the American folk artist who began painting in earnest at the age of 78; and

Julia Hawkins, who was 101 years old when she set her first world record—clocking a 39.62 for the 100-metre dash, just one year after she first began running.

I’m guessing none of the above in their earlier years knew what they might be. But what if they’d said “I’m too old”, when the notion to be what they might be struck them? We’re our own worst purveyors of ageism. This term, developed by gerontologist Robert Butler in 1969, describes the unfair, bigoted limitation of a person’s access to certain valued opportunities and rights based on an irrelevant criterium such as the number of trips a person has made around the sun. And that’s exactly what we do to ourselves whenever we say “I’m too old to….”.

My mom, age 92 as I pen this, is an excellent example of someone who refuses to inflict ageism upon herself. Roughly a decade earlier, when she was a spry octogenarian cottaging on the Mattawa River north of Algonquin Park in Ontario, Canada, she joined in on a Fall kayaking excursion with two daughters and a granddaughter on the beautiful, cold and very deep Mattawa.

Due to a leak in her boat detected too late, Mom was tipped into the frigid waters and pluckily made her way to the river’s edge, which was a sheer rock cliff that she clung to, weighed down by her soaked clothing, until we were able to maneuver a canoe to her rescue. Did that deter her from another water adventure on the same river ten years later? Nope. And this time, at the age of 91, she found herself sitting in a sunken canoe in the middle of frothy rapids, submerged up to her waist, laughing at the situation. At least this time the water was warm.

We don’t stop playing because we grow old; we grow old because we stop playing, said George Bernard Shaw. To this I would add, we don’t stop making a difference because we grow old; we grow old because we stop making a difference. If you’ve read my blog Saving Cece, you’ll understand how important it is for me to make a difference regarding climate change and environmental degradation. We see youth, like Greta Thunberg and Autumn Peltier standing up for the environment. But where are the oldsters who instead of youth have experience and wisdom on side? We are never too old to contribute in some manner to the betterment of this world. What might you have been if something hadn’t been holding you back along the way? Whether you’re 17 or 71, now is the time to be that. Why? Because regardless of your age, now more than ever before, the world needs whatever you have to offer—however inconsequential you think it may be. A single raindrop doesn’t end a drought, but many drops together do.

In 2019, there were 703 million persons aged 65 or over in the world (www.un.org). Just in that age category alone, that’s a lot of experience, wisdom and talent to be harvested. Whatever category you’re in, please stop thinking you have nothing to offer, you don’t have what it takes, or you’re not the right age. Do what you can with what you’ve got right now.

This is my challenge to myself and you: let’s stop acting our age and start playing and contributing purposefully so that not only is life fun, full and meaningful, but each in our own way also becomes a positive role model making this world a better place.