How the saints led me to environmentalism 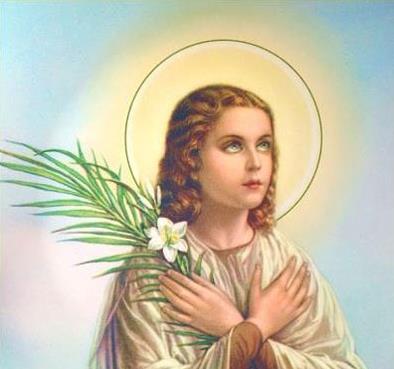 In the house I grew up in there were invisible beings everywhere. One was my guardian angel; there were various saints (dead holy people); there was Mary, Jesus’s beautiful, pure, perfect mom. It goes without saying that God, Jesus and the Holy Ghost were also around. Early on, these unseen entities were even more amorphous than the elusive tooth fairy, Easter bunny and Santa Claus, but unlike these special-occasion guests, they were permanent residents. As a child, I never questioned the presence of these entities. They were a benevolent, comforting, intrinsic part of my daily life, simply there.

I clearly remember the day they morphed into something much more for me. It was a spine-tingling experience.

It happened at the time I was learning to read.  I’d picked up a children’s missal that was gifted to me on my First Holy Communion. At the back of the missal, I discovered many of the prayers I’d memorized almost as soon as I could talk, such as Angel of God, Our Father, Hail Mary, Glory Be. I’d been reciting—regurgitating by rote—these prayers daily, probably for about three years by then, with no thought about what it was I was reciting, or why.

As I read the words of the prayers a profound dawning happened. These prayers, I realized, were actually my half of my conversation with these invisible beings surrounding me, not just a prerequisite recitation for meals and bed.

In addition to talking with my guardian angel, the saints and Mary, some of the communicating was actually directly with Jesus and God. And all these entities were really out there, within ear shot! There was this whole other, bigger world occupied by unseeable beings with whom I could interact. In that aha! moment of enlightenment I thought for sure God had tapped me specially on the shoulder to be one of his saints. I was in on a holy secret.

I set up an altar in my bedroom where I’d say my prayers, or, rather, now knowingly communicated with the unseeables. Its centrepiece was the white ceramic statute of the Virgin Mary I’d received from my Godparents, Aunt Mary and Uncle Joe (their real names honestly). Almost as soon as I could, I began voraciously reading children’s stories of the saints. I was in awe of, well, their saintliness. The illustrations depicted their peaceful countenances even when facing death for their beliefs and holiness; their loving faces turned upward in joyful anticipation of meeting The Almighty.

From that early age, I wanted what they had. Without being able to articulate it then, I now think of what they emanated as trust, peace, the love of the divine, which had to be as good as it gets in this world. For a kid, I took it all very seriously, never speaking a word to anyone of the “revelation” I received. I was set on becoming a nun, certain that was the path to sainthood.

But I did not get me to a nunnery.

The hormone-induced promise of romance, and the more familiar and common path of marriage, motherhood and career proved to have the stronger pull. Down that road I went, and along the way over the decades my devout religiosity ever so gradually, unconsciously evolved into a new, hybrid spirituality that I was startled one day to discover was very Buddhist-like. But the entities have never, ever left me.

In some ways they’ve remained unchanged; in other ways they, too, have evolved dramatically. In the most important way, they’ve been my portal into a life where I feel one with all; connected to and inseparable from the material world and beyond; in a relationship with everything I can and cannot experience with my five senses.

The unseeable beings still bring me that very same benevolence and comfort I experienced when they were initially a taken-for-granted, unquestioned part of my childhood. What’s changed is that the entities I first knew as heavenly beings have morphed into all that is non-sensorial, which I choose to believe encompasses much, much more than what I’m able to experience through my five senses, than what science has been able to name.

Feeling as if I’m a part of, connected to, in relationship with all—tangible and intangible—has the life-enriching benefits of always being at home, of belonging, of being immersed in trust, peace, and love, like what I saw shining out of the faces of the saints in the illustrated children’s books. As I’ve written of elsewhere, for a long period of my life I felt painfully disconnected from other people; but even during that time, beneath the loneliness and sense of separateness from my fellow humans, I always felt the connection with something bigger.

It’s to this enduring sense of connectedness to the whole that I attribute my easy move into advocacy for environmentalism and ecological sustainability. I see the world and beyond as enchanted, imbued with spirit, sacred. Because I’m an intrinsic part of Earth’s material and immaterial ecology, “one with all”, it’s paramount and non-negotiable for me to help protect the “all” from sacrilege.

All these years later, I’m truly grateful for the religious indoctrination I experienced as a child. Would I have otherwise arrived at the place I am now? Without it, could I have come to so naturally, comfortably and rewardingly embrace the concept of being one with all?  I’ll never know, at least not with my mortal mind.