You said it, Einstein 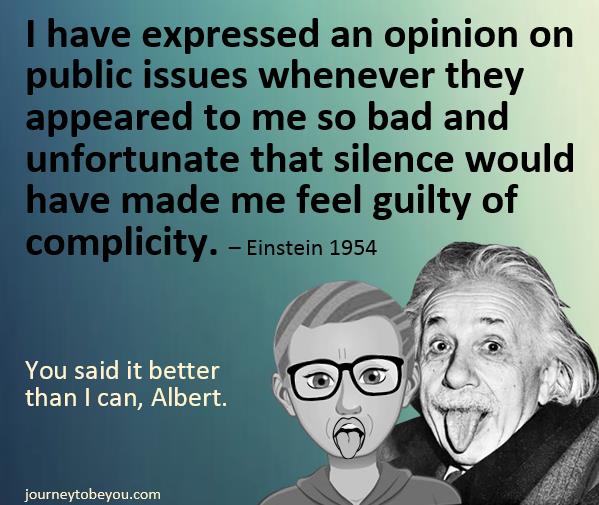 Einstein departed this earthly domain in 1955 when I was eight weeks in utero. In a reincarnationy sort of way, I have fun pretending a bit of his quirky essence found its way into my developing being. Sadly, not a single one of his brain cells made it over, but I’m pretty sure we share a really similar worldview.

My reaction to most Einstein quotes (unless they’re the deep science ones I don’t get) is: Hell Yes!!

The quote I used in the image helps me understand why I feel so compelled to speak out about our responsibility to feel, think and act as if we’re in the throws of an irrefutable global environmental crisis.

I’m not writing blogs, making videos, and creating social media posts because I have nothing better to do in my retirement.

Actually, come to think of it, that’s exactly why I’m doing all this stuff. I can think of no better use of my time than doing what I can to spread the sense of urgency and responsibility needed to stave off an ecological disaster.

In a 1935 letter to the editor of The New York Times, my buddy, Albert, said:

“Beneath the effort directed toward the accumulation of worldly goods lies all too frequently the illusion that this is the most substantial and desirable end to be achieved; but there is, fortunately, a minority composed of those who recognize early in their lives that the most beautiful and satisfying experiences open to humankind are not derived from the outside, but are bound up with the development of the individual’s own feeling, thinking and acting.”

My passion is directed at helping to increase that minority into a majority.

To help move human behaviour across the threshold from unsustainable consumerism to sustainable non-materialism.

And to do this by creating awareness that beauty and satisfaction come from the stuff that’s inside of us, not the material things on the outside.

For more on this, check out my blogs: There’s a hole in the bucket, dear Liza, Saving Cece, and others at www.journeytobeyou.com/blog