Your Personality in a Picture 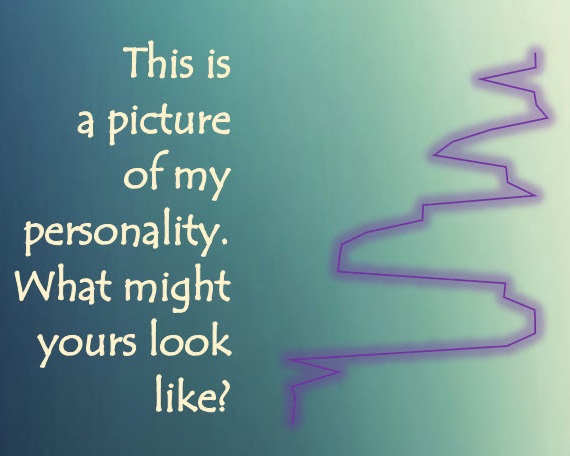 This article explains how it’s impossible for you to be just an “average” person. It includes a quick, unscientific, fun personality exercise you can do to illustrate you’re anything but average, or a “middler” as I think of it. In fact, it demonstrates your uniqueness. The article begins with my brief personal story about overcoming the not-enough-ness of being a middler.

“Here I am, stuck in the middle with you.”  – Gerry Rafferty, The Stealers Wheel

It’s all the other “middle” stuff that for years wreaked havoc on my self-confidence and self-esteem and fuelled my not-enough-ness:

Thankfully, I woke up (gradually) with the realization I would stop getting hit if I ditched those beliefs. I’ve come to appreciate, being stuck in the middle isn’t really the purgatory I so long thought it to be. In fact, there is no such thing as being in “the middle” when it comes to life.

If you notice in my bullet list of evidence of me being a middler, all my qualifications require comparison of myself to others. There were always higher and lower student achievers, more and less dedicated volunteers, first and fourth place speaking competition winners, greater and lesser impassioned environmentalists, non-influencers and highly-impactful influencers.

When I came to understand that my life story is unique—a hugely complex combination of my DNA, my circumstances, my personality, my values, my decisions—I was able to see the absurdity of comparing and positioning myself relative to any other unique person.

As Zen Shin said: “A flower does not think of competing with the flower next to it. It just blooms.” That clarity is what enabled me to discard the self-sabotaging beliefs I held, to do away with the middler concept. I’ve decided I’ll just bloom. In my own way. Whether 2 or 200,000 people happen to see my bloom, has no bearing on how uniquely beautiful it is.

The only way that I can be stuck in the middle anymore is if I choose to stay forever a bud instead of blooming.

If you’re struggling with appreciating yourself as a beautiful, incomparable, unique person who is anything but average, you may want to complete this quick exercise. There’s nothing “scientific” about it; its purpose is simply to provide you with a fun “visual” of your one-of-a-kind personality.

Personality in a Picture Exercise

To do this exercise you’ll need to print out the Personality in a Picture Exercise sheet. And you’ll require a pen or pencil to connect the dots on the chart.

You’ll see that the left-side column of the exercise sheet contains the high-level personality traits often described in the field of psychology as “The Big Five”, with “OCEAN” as the acronym for the traits, namely: Openness, Conscientiousness, Extroversion, Agreeableness and Neuroticism. The second column lists the sub-traits, obtained from https://grammar.yourdictionary.com/style-and-usage/words-that-describe-personality-traits.html. The remainder of the sheet is a chart, containing a continuum (or scale) of dots for each of the sub-traits.

The exercise entails you marking on the continuum the degree to which you think each sub-personality trait applies to you, between “not at all” on the left side of the chart and “completely” on the right side. You can mark on or between the dots on each line. After you’ve marked a dot for each sub-trait, connect the marked dots with a line.  Why not choose a pen or pencil colour that best suits your personality! And, voila! You have a picture of your personality.

Here’s what my Personality in a Picture looks like: 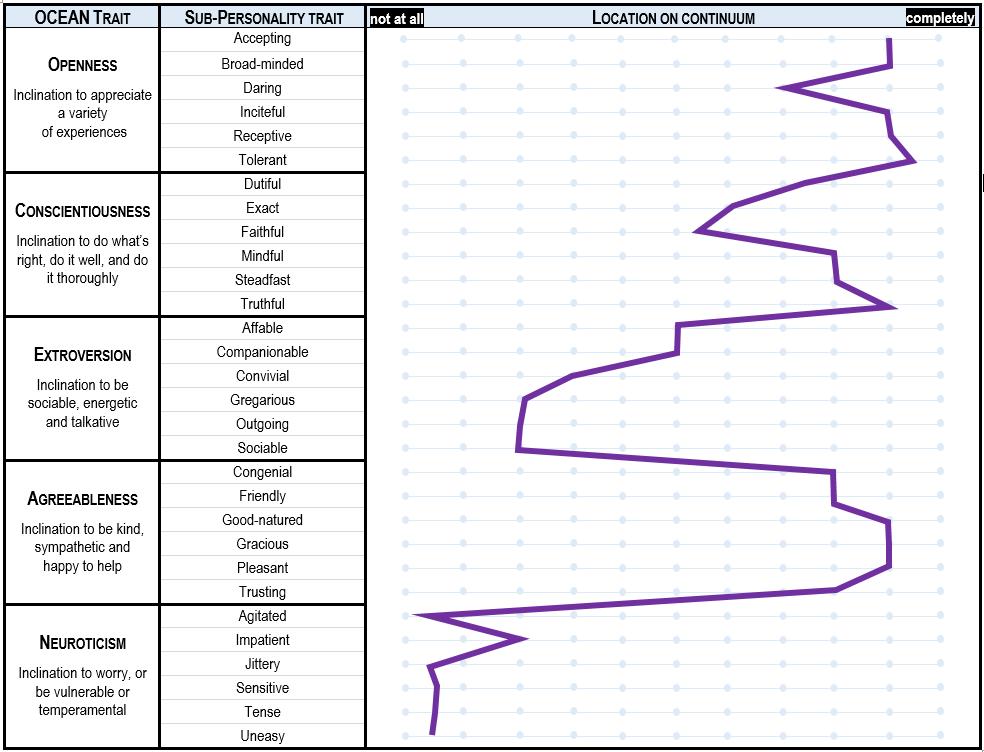 Just for the fun of it, if you want to take the exercise one step further, ask yourself if your personality picture reminds you of anything? As soon as I finished my exercise, this is what I saw in my mind’s eye:

My personality looks like an irregular coastline. And I love that my imagination took me there, because I find meaning in that dynamic, ever-changing, zone between land and water, which I speak about in my blog, Lake Huron.

It reminds me, too, that personality is not fixed. It is fluid, and with self-awareness you can change your traits. If there’s anything about the picture of your personality that doesn’t sit well with you, know you have the ability to change it.

If you’d like to go more deeply into the process of change, I invite you to check out the BU Journey program. It’s a self-paced course, in an audio-book-like format, offering a personal development exercise in each of the seven modules.